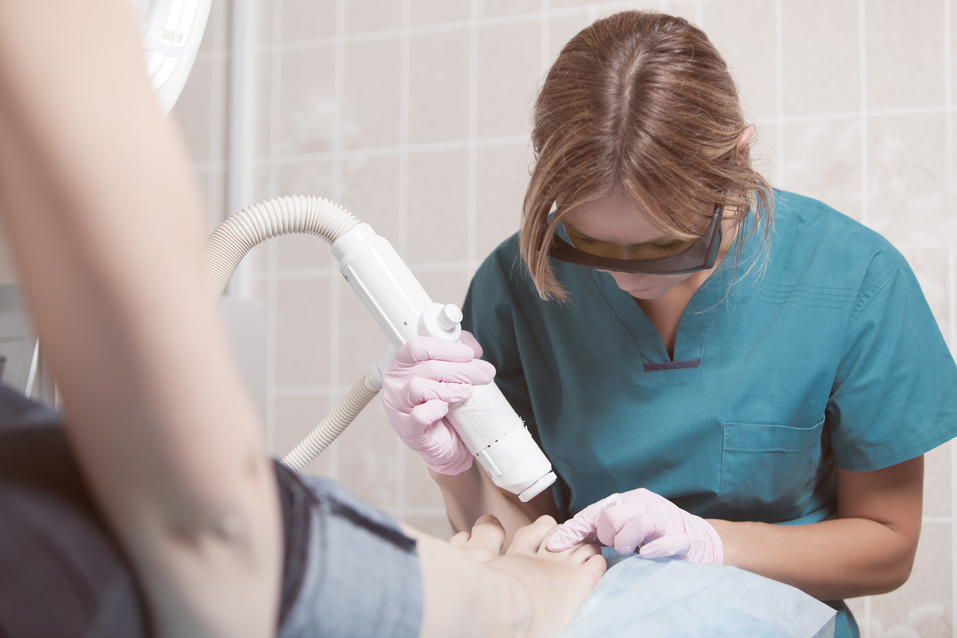 Low-Level Laser Therapy (LLLT) is believed to enhance healing, reduce pain and edema, reduce inflammation and increase circulation. LLLT does not produce its effects through heat.

Many providers will use LLLT in combination with other conservative approaches such as orthotics and stretching. It is widely available in chiropractic, physical therapy, and some orthopedic offices.

LLLT has been shown to be safe at designated doses and appears to have side effects similar to placebo (“sugar pill”) treatments.

Evidence of the effectiveness of LLLT for plantar fasciitis is conflicting, though considered promising by some researchers. One small recent study showed clinically significant improvement with LLLT, though other researchers have found little evidence it helps. Nevertheless, many providers will use LLLT in combination with other conservative approaches such as orthotics and stretching.

One problem with LLLT evidence is that there are simply not enough high-quality studies available. For this reason, most insurance companies consider it experimental or investigational and will not pay for it.

While it might be possible to perform laser therapy to one’s self, this is unlikely. In most jurisdictions, laser units are only sold to licensed professionals and tend to be cost-prohibitive, ranging in price from hundreds to tens of thousands of dollars.

Laser therapy is relatively inexpensive, ranging from $20-$50 per session in most clinics. Typically, laser therapy treatment plans run from one or two sessions to 10-12 sessions. In general, a reasonable course of laser therapy might include 6-12 sessions varying from daily to 2 times per week. It is widely available in chiropractic, physical therapy, and some orthopedic offices, among others.

The jury is still out on whether or not LLLT is really effective for plantar fasciitis. However, it is generally safe and inexpensive, and some studies have suggested it may help. We recommend it as a treatment option, especially before considering more invasive treatments such as injections, ESWT (Extracorporeal Shock Wave Therapy) or surgery.

Also referred to as Photobiomodulation, or “cold laser”, this therapy has been around for more than 40 years. Laser therapy uses light, which is absorbed by tissues to produce cellular changes, which include increases in the production of cellular energy, among other effects. Low Level Laser Therapy is believed to enhance healing, reduce pain and edema, reduce inflammation and increases circulation. LLLT does not produce its effects through heat.

LLLT is used on a variety of conditions, from shoulder and elbow injuries to neck and back pain, plantar fasciitis, knee pain, and other musculoskeletal conditions. While research is ongoing, there is evidence of effectiveness for some conditions (such as certain shoulder conditions and tennis elbow) and less evidence for other conditions.

Back pain disorder remains a wide-spread and leading cause of work-time lost and increased medical health care costs. Many studies have shown that conservative treatment rather than surgery has been shown to be effective for pain relief and proven cost benefit. Conservative care for back pain includes chiropractic, physiotherapy, acupuncture,  combined with appropriate exercise regimen. Traction therapy…
Read More →

Stay in Shape During COVID-19

Corona Virus, COVID-19: Restricted to shelter at home: What can you do to stay in shape? With the shelter in place happening all over the world, you may be asking yourself what you can do to stay in shape or at least continue to manage your health, fitness and in some cases, your rehab while…
Read More →
Change Location
Find awesome listings near you!